Are You Financially Dependent? 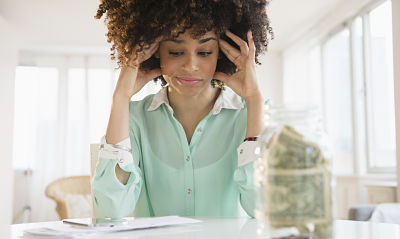 One of the topics that many people avoid talking about - is money.

Financial literacy is rarely taught - not even the basics of saving and spending.  Many times people learn about and implement financial habits as a last resort, after a crisis – a divorce, a bankruptcy, a job loss.

Because of our lack of financial literacy we are limited to the experiences dictated by our environments, including the limiting beliefs from our community, our family and our personal experience. This can lead to financial dependency or financial abuse. In both situations people are trapped because they lack financial literacy, resources and the support they need to make a change.

These issues affect people we all know - including friends, acquaintances and loved ones.

Financial Freedom is achieved as a result of being informed, getting support, having the courage to face your fears and taking action so you can shift from Victim to Victory. In order to have Financial Freedom we first have to face the issues of financial dependency

Financial dependency occurs when someone is dependent on a person, job or situation for money and they feel trapped.

One example is when women stay in their job or career when they are being harassed because they need their job to support themselves and their family.

They may work in an industry where harassment is the norm or people expect that it’s just part of the culture.  Take for instance the current #metoo movement.  Many of the women in this movement stayed in situations because they felt they had to financially.

If they had spoken up they may have been ostracized, lost their jobs and could have been banned from getting work in the future…they were financially dependent on their job.

Often, family, friends and colleagues tell women in these situations “it’s just the way it is, “you’re lucky to have that job”.  In many instances they lack the support they need to stand up for themselves and so they stay.

Financial abuse occurs when someone is in a relationship and another person has power over them because they don’t have access to money, information, resources or a way out.

It can include: control of how the money is spent, restricting access to money, stopping the victim from earning money.

The Purple Purse –the Allstate Foundation’s program to help victims of domestic violence through financial empowerment calls financial abuse “the Invisible weapon”.  Why?  According to the Purple Purse:

Financially they are isolated and prevented from access to financial resources – bank accounts, credit cards, transportation.

Emotionally they lack the confidence and belief that they are capable to make it without their abuser.

The current #whyIstayed movement brings the abuse conversation to the forefront and has revealed that many women are told by family, friends, clergy, etc “try harder”, “make it work”, “think about your children”, “things will get better” – so they listen and they stay.

What you can do about Financial Dependency and Abuse

Get informed – April is recognized in the United States as National Financial Literacy Month. There are many free resources online and offered by your local financial institutions and non-profits to help you learn about, establish and maintain healthy money habits.

I always tell my clients – you don’t have to be an expert, you just need to be informed.

Ask for support and get help - If you are a victim –– there are resources out there to help you – ask for help.

Share Your Story–have the courage to own your voice and share your story – you never know who you might touch, inspire and help to break free.

Your Comments Are Appreciated!